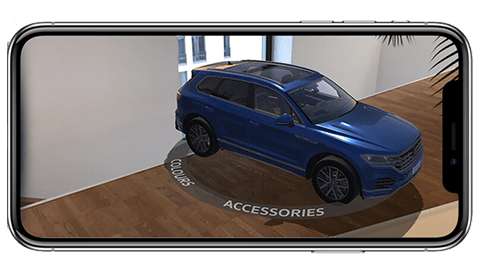 Volkswagen is currently facing one of the biggest transformations in the company's history: the transition from car manufacturer to e-mobility provider. All business areas are heavily investing in digitalization.

Digital marketing channels are more and more becoming the focus in the customer journey. Especially for smartphone users the goal is to create enthusiasm for the brand through new digital touch points, including augmented reality and mixed reality apps.

Volkswagen created a new version of the Touareg App with augmented reality. The aim was to make the interaction with the virtual car model easier and even more intuitive. Additionally, they built a new concept for navigating through the content of the app (e.g. virtual reality animations) by interacting with selectable parts of the virtual model. Augmented reality is supposed to offer users a playful but real experience of the car even before going to the dealership.

In a usability test we examined the app with buyers of new cars who are interested in the Touareg. The goal was to uncover usability issues and unused potential of the new interaction concept.

Usability Test with a twist

To meet the challenge of testing an augmented reality app with a full-scale VW Touareg model (5m length and 2m width) we adapted our testing set-up: We chose a room that is big enough for the model and allows users to move around freely.

To reproduce the typical context of use of a home we arranged comfortable furniture in the room. We installed wide angle cameras as well as microphones and simultaneously recorded the smartphone screen which allowed for an ideal observation situation. 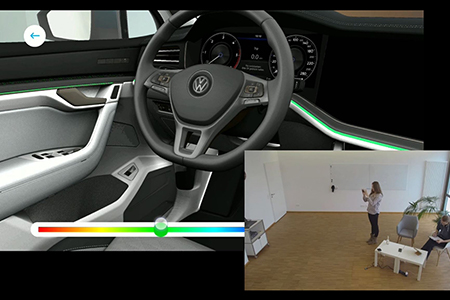 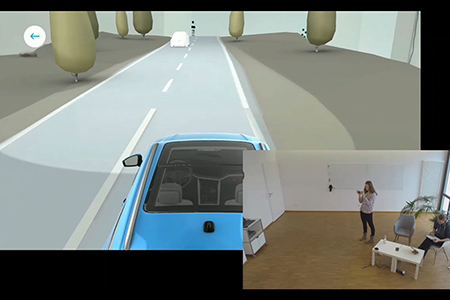 Only by allowing three-dimensional interactions (e.g. walking around the car) we were able to uncover unexpected usability issues. To solve these problems, we recommended a more intuitive user guidance in the app that introduces the different interaction forms step by step. By interviewing the users, we identified previously unknown user needs for the app, e.g. a direct adjustment of visual equipment components that give the users a realistic impression of their desired car, even before it is built.

The results of the usability test were directly incorporated into the newly developed E-mobility App that provides an augmented reality visualization the Volkswagen ID.3.