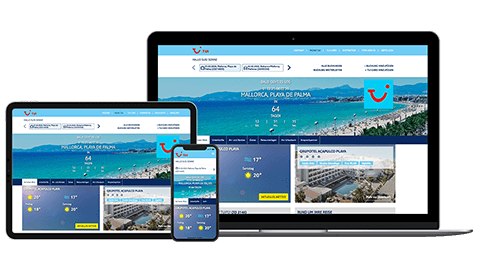 Customers can access all necessary information about their trip through the personalized travel portal Meine TUI (engl: My TUI). Besides managing their travel documents and booked services, users can add further trips and learn interesting facts about their travel destination.

A first usability test of the Meine TUI travel portal revealed that users struggled with navigation and therefore failed to find important information. Additionally, users were not aware of the variety of provided services. These results, paired with the project requirement for a responsive mobile layout, led to a redesign of the portal.

Findings of the first usability test as well as business requirements and technical restrictions were especially important for the list of redesign requirements. Regular workshops involving project stakeholders were used to collaboratively collect requirements and develop new ideas. The close coordination facilitated a goal-oriented approach.

Identified requirements were used to improve the information architecture and develop a new, responsive concept which provides personalized content and supports the whole user journey – from booking a trip to returning home. Technical conditions proved to be a major challenge. Users expected to see individual components of their booking (flight and hotel, rental car) all in one place, however this was impossible due to technical limitations. This problem was bypassed by the implementation of numerous hyperlinks between the respective content areas.

Following the user-centered design approach users were asked for feedback at an early stage in the process and completed typical tasks in a usability test with a high-fidelity prototype.

The results of the usability test served as guidelines for the continuing redesign and emphasized how much easier using the portal had already become because of the new navigation structure. The hyperlinks between different content areas also had the desired effect even though users still did not understand why the areas were separated.

Based on those results, the prototype was iteratively improved and fleshed out. In a final step, the visual design was included. This high-fidelity prototype was again tested, not just on usability this time, but on user experience as well.

Users enjoyed the portal’s ‘vacation mood’ look and feel. Not only was the user experience assessed as considerably more positive compared to the old design, but also compared to the first testing round of the redesign.

The Result of the User-Centered Design

Through the user-centered design approach it was possible to develop a new, optimized design of the travel portal Meine TUI which meets the requirements of both users and management.

Despite technical limitations, the responsive design allows for easy interaction on all devices and in every stage of the journey. Users are treated with a fun, clear and easy-to-use portal. Large images and a lot of information increase their excitement for the next holiday. The project’s success was reflected in the positive feedback from enthusiastic customers, which TUI was pleased to receive after implementation.